I am honored to introduce you to this week’s Meet a Mom, Karen Zilinski, who is the Executive Director of The Janet Zilinski Memorial Fund (The Janet Fund) – a vital initiative that was established in honor of her daughter Janet with the mission of protecting other children and families in New Jersey from Sudden Cardiac Arrest. 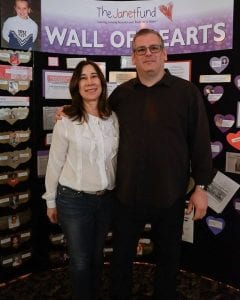 town?
We have lived in Warren Township for 25 years. Jim grew up in Old Bridge, NJ and Karen grew up in Middlesex, NJ.

Please share your story..
Our life used to be very normal. We had two children Janet, 11 years old and Jimmy, 8. Our lives were spent working, spending time with family and friends and taking our kids to the many sports and activities they participated in. In August, the kids were spending their days at Day Camp Sunshine and then going to cheerleading and football practice at night.

On August 10th, 2006 while jogging a lap at cheerleading practice, Janet told a friend she was feeling tired and was going to lie down. Janet collapsed and went into sudden cardiac arrest. A pediatric trauma nurse onsite began administering CPR immediately but an Automated External Defibrillator was not available.

It would take over 20 minutes for the ambulance to arrive and it was almost an hour before Janet reached the hospital. While in the ambulance, Janet was fighting for her life and CPR was being done continuously. Paramedics, the most advanced life support, were unavailable to respond to the field but met us 2 miles from the hospital and took over care. It was a miracle that they were able to revive her.

Janet was alive when we arrived at the hospital. She stabilized and was alert. We spoke with her and told her how much we love her and to fight and be strong. The doctors asked her questions and she responded to all of them. A while later, we were told that she would be OK. With this great news, everyone started to breathe an apprehensive sigh of relief although, we had no idea what had just happened.   Minutes later, Janet went into cardiac arrest again. The doctors worked vigilantly to save her but could not. More than two years after, it was discovered that Janet was born with a congenital heart defect known as bilateral hypoplasia of the right and left circumflex coronary arteries. The first symptom is often sudden death. A physical 6 weeks prior failed to detect the condition.

The Janet Zilinski Memorial Fund (The Janet Fund) was established immediately after as a way of letting Janet’s legacy live on and protecting other children and families in New Jersey from Sudden Cardiac Arrest. 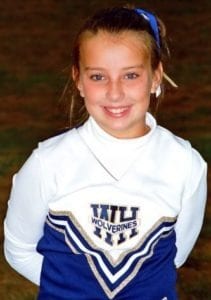 What is The Janet Fund’s Mission?
The Janet Fund’s mission is to raise awareness of Sudden Cardiac Arrest (SCA) in youth and preventing sudden cardiac death in New Jersey. We are committed to improving the survival rate by making Automated External Defibrillators (AEDs) readily available at New Jersey schools, playing fields and youth sports.

What is Sudden Cardiac Arrest (SCA)
SCA is a condition that occurs when the heart abruptly ceases to function causing the heart’s pumping to suddenly become rapid and irregular. Blood is no longer pumped to the rest of the body and death is imminent if not treated.

Symptoms of SCA in children include:
Dizziness or fainting (especially during sports/activity)
Fatigue
Lightheadedness
Heart Palpitations
Unable to keep up with friends, tires more quickly than friends
None – Victims often appear healthy without any signs/symptoms

Approximately 95% of victims die before reaching the hospital.
Only 32% receive bystander CPR.

Tell us about the work you have done in Warren?
The Janet Fund has donated AEDs and outdoor storage cabinets to all public playing fields in Warren Township as well as to all of our youth sports organizations and to our High School. In 2017, Janet’s Law saved the life of Sarah Magaldo at Watchung Hills High School in Warren. The Janet Fund was the first organization to place AEDs on playing fields in NJ. Warren Township was the first location to have AEDs mounted and available to the lay person.

What more are you doing in New Jersey?
The Janet Fund was the leader in NJ’s AED school legislation known as Janet’s Law. We dedicated 6 years to fight for Janet’s Law, which was signed in 2012 and became effective 9/1/14. Janet’s Law has saved 20 lives to date.

This law protects 1.6 million NJ students and requires:
All NJ K-12 schools to have a minimum of 1 AED in an unlocked, accessible locate with appropriate signage
All schools have an emergency action plan for cardiac arrest
Each school have a minimum of 5 trained responders in CPR/AED use.
Requires an AED be available for all school sponsored activities and athletic events.

In support of Janet’s Law and our mission to protect NJ youth from SCA, the Janet Fund continues to donate AEDs to NJ schools, township playing fields and youth organizations, provides free CPR and AED training and raises awareness of SCA. In addition, in memory of Janet’s spirit and love for others, we perform random acts of kindness to those in need. AED Grant requests are available on our website at www.thejanetfund.org

The Janet Fund has trained over 4000 people in CPR/AED use, donated over 400 AEDs to schools and organizations throughout NJ.

How has this community been instrumental in getting you to where you are now?
The community supported us during our darkest days – providing us with love, hugs, months of meals and emotional support. The giving nature of the community is what made The Janet Fund a reality. Their generous donations and continuous support of our annual fundraiser have been the lifeblood of allowing The Janet Fund to continue our mission. They were instrumental in supporting Janet’s Law, signing petitions and writing letters to our legislature.

What can parents do?
Know the warning signs
Know the location of the AED
Learn CPR and how to use an AED
Be an advocate
Ask your pediatrician questions and get your child screened
Volunteer with the Janet Fund
Volunteer to help your sports/youth organizations acquire AEDs and establish Emergency Action Plans
Support our annual fundraiser or make a donation

For more information on The Janet Fund, please click here

For more information on Who We Play For, please click here